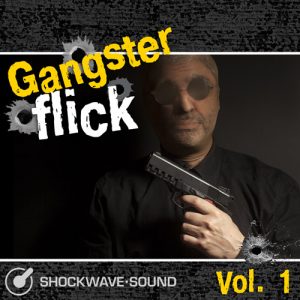 An amazing collection of royalty-free music available for immediate licensing, download, and legal use in your own productions such as (but not limited to) Trailers, Videos, Games, Podcasts, Audio dramas, TV, Film, Apps, Installations and more. Tracks composed by Felipe Vassão, Wez Devine and Julio Kladniew.

As with all our collections, each track can be licensed individually, if you don’t need the whole album.

Hans Jenny and The Sound Matrix 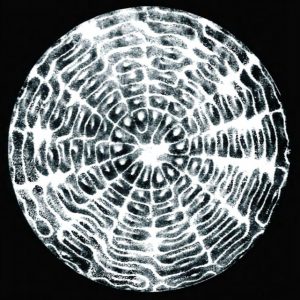 Cymatics and the Sound Matrix

Humans have long considered sound and music as mystical and magical, whether worshipped by the ancients and embedded in political and culture in ancient China, regarded as a portal to the infinite by Buddhists chanting OM, or modern day musicians and sound designers revelling in and revering their own sound creations. Sound inspires poets and sculptures across the world, leaders, rebels, teachers and students, the “everyday man” both old and young alike. Sound plays major roles in human life, from the first cry of the newborn baby to the final breath and “death rattle” of those passing. For most of us, sound encompasses our entire lives and every breathing moment. At times it is to be rejoiced, other times to be escaped (has anyone else ever asked the room, “Can everyone just be quiet for a minute please I can’t think!). It is argued that pure silence only exists in “space”. Truly, sonic vibrations are as prevalent as particles of light, moving atoms back and forth within this physical plane. There is a concept that unveils this, a belief in a natural structure that exists beyond the human world and is and embedded in the physical structure of the universe itself: the sound matrix. 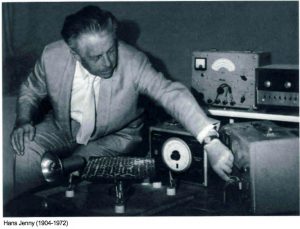 The belief in a sound matrix is the idea that a pre-created and predetermined sound configuration exists innately in the universe, one that can be exposed and studied. Several scholar/scientists have contributed to this field: now known as “cymatics,” a term applied by researcher Hans Jenny (1904-1972). Essentially, he explored a myriad of different distinct patterns created when particles are placed on a plate and vibrated at different frequencies. In other words, cymatics is the study of wave phenomena that created repeatable physical patterns from the frequency sound vibration of particles. His bookCymatics: A Study of Wave Phenomenon and Vibration  is the defining work to be discussed further on in this post.

The inspiration for the exploration into cymatics is steeped in “anthroposophy,” a philosophy founded by Rudolf Steiner (1861-1925), which states that human beings can intellectually access and uncover elements of an existing spiritual plane. In fact, Jenny’s own book is “Dedicated to the memory and research of Rudolf Steiner.” Anthroposophists believe that the witness of the spiritual world and its demonstration through experiments in fields such as cymatics will stand the test of rational verification. This foray into sound study is an example of the founding principle of anthroposophy and mimics the methods of the natural sciences in their practices of evidence-based research. Before Jenny, however, there are a few other individuals that paved the way for this exploration into the unseen structures embedded and surrounding us in our universe. 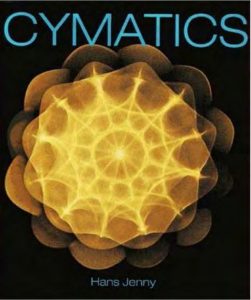 The beginnings of cymatics 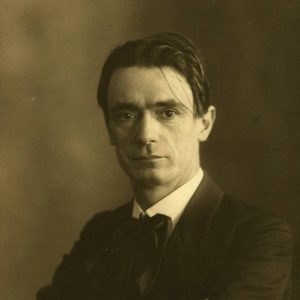 Ideas of inherent vibrational patterns in the natural world began centuries ago, with Galileo Galilei often quoted as an early witness to the phenomena from his writings of 1632 in his “Dialogue Concerning the Two Chief World Systems.” He explains his experiences when scraping a plate of brass with a chisel, attempting to clean it. Galileo noticed both a high whistling sound and the production of parallel streaks of brass particles that only occurred in tandem with the sound. Fifty years later, scientist and musician Robert Hooke, in 1680, noticed nodal patterns created with vibrating glass. Using a violin bow on a flour covered glass plate, he produced repeated patterns. One would think today, imaging back, that both of these experimenters must have experienced something mystical. They discovered, or uncovered, a structure within the physical world not yet noted by humankind; a matrix that predates history, clearly put in place by a non-human force. No wonder their testimony has withstood the test of time. 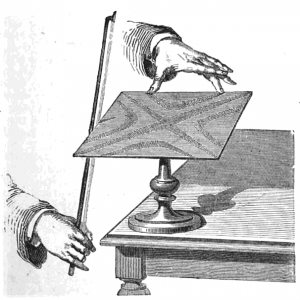 One hundred years after Hooke’s observations, one Ernst Florence Friedrich Chladni (1756-1827) published “Entdeckungen über die Theorie des Klanges” translated to English as “Discoveries in the Theory of Sound.” Chladni was inspecting the properties of “Lichtenberg figures.” German physicist Georg Christoph Lichtenberg discovered these radial patterns in in 1777 when placing powdered material on a high-voltage plate. Chladni had the intriguing impetus to run a violin bow along a metal plate holding powder (some say sand), which created vibrations and thus arranged the particles into patterns, creating visibility to the vibrations.  It’s a complex phenomenon due to wave behavior with the particles being moved from the “antinode” to the “nodal” lines, but suffice it to day – really cool patterns emerged. “Hmmm … wow, what are these fantastic shapes appearing from sound? From whence do they come?” Chladni may have asked.

A good while later, Hans Jenny whistled his own experimental tune of the 1960s and worked diligently for over a decade to create and study patterns created by vibration in the exact same vein as his predecessors. With the aid of years of technology, his vibrating method was superior to those before him in its accuracy. He used crystal oscillators and tone generators to control the frequency and amplitude of his signals as opposed to the anvil of Galileo and the bow of Chladni. Jenny connected these devices to metal plates and his methods were repeatable, a necessary condition in scientific research. Below is an example of the intricate patterns that Jenny uncovered through his work. This, in particular, is the latticework in liquid, seen in video below 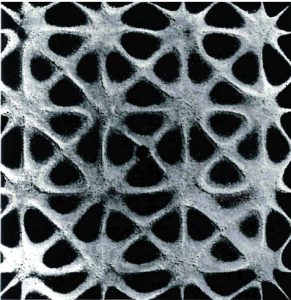 Jenny published Kymatik (translated Cymatics) in 1967 after, as mentioned, more than 10 years of intense study. When reading through his work, found at through a google search of “hans jenny cymatics pdf,” his adherence to anthroposophy is obvious as he continually attempts to connect the dots between his work and other periodic systems throughout the physical world: “Whenever we look in Nature, animate or inanimate, we see widespread evidence of periodic systems. These systems show a continuously repeated change from one set of conditions to another, opposite set”(Jenny, 17) He mentions human circulation and respiration, the cycles found within the vegetable and animal kingdoms and goes into chemistry as he sets up the argument for cymatics as a structure of the universe predating humankind: that the organization of the sound matrix is prime and found throughout all matter, and recognized throughout his work.

A colleague of his, Jeff Volk, sums up the most poignant of Jenny’s ideas succinctly in his introduction. He writes: that “the principle underlying Cymatics, that of periodicity, is so ubiquitous in nature (and in Nature), that it is found in all manner of phenomena.” Volk further reflects on how Jenny’s discoveries “mirrored biological forms and natural processes, as well as flowers, mandalas and intricate geometric designs … these experiments seemed to reveal the hidden nature of creation, to lay bare the very principle through which matter coalesces into form.” Volk The most striking of Volk’s points is that Jenny’s shapes were the result of “audible vibration.” In other words, cymatics allows us to see sound. 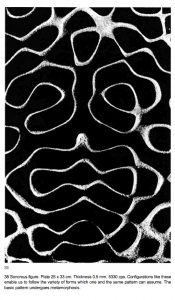 By carefully controlling the frequencies he generated and the area size of the metal plates, Jenny could compare various substances such as sand, fluids, and powders at different frequencies and in different areas. The vibrations had a large range which resulted in a large array of various geometric shapes. From these he noted three fundamental principles of vibration and wave motion. One pole exhibits patterns and figures which is visible. The other pole demonstrates kinetic processes (plate vibrations) which is audible. Third, the entire process is periodic, which Jenny terms “essential periodicity.” The concept of essential periodicity is significant in understanding Jenny’s mission: “essential” refers to patterns that are of the essence of the physical world, and periodicity clearly that periodic cycles are also embedded in the physical plane.

Jenny explores a wide array of different frequencies on different media resulting in a striking variety of visible patterns: square metal plates of various sizes, triangular plates with crystals attached to their underside, The images in this video begin at 2:07

The moments above and others through the video are reminiscent of other living and non-living beings and figures found in nature, clearly. I will end this post with Jenny’s own words which I’ve transcribed from the video above and shed further light and is purpose and vision on the primacy of sound:

You will see many things that answer many questions. You will see living forms, living amoeba, almost animal-like creatures, you will see continents being formed, the earth itself coming into existence, explosions, eruptions, atomic explosions and bombs, you can see all this and watch it before your eyes. But everything owes its existence solely and completely to sound. Sound is a factor which holds it together. Sound is the basis of form and shape. In the beginning was the word and the word was God. We are told this is how the world began and how creation took shape.~ Hans Jenny