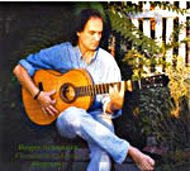 A leader in the Nuevo Flamenco movement, a music that blends the passionate gypsy roots of rumba with Afrocuban rhythms; Roger Scannura in his late teens emigrated to Canada from the history drenched island of Malta. In Toronto he discovered the godfather of flamenco, Pepe Habichuela, followed him to Spain and studied under his tutelate for several years. Roger Scannura's music has been featured on TVO, Bravo!, CBC, GLOBAL, and "Marteiro", a Canadian film centre film. Today, as an inspirational flamenco guitarist and composer he has thrilled sold-out audiences in both North America and Europe.