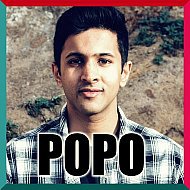 Popo is a Pop, Rock and Electronic Music Composer/Producer and the founder of 24Fret Productions. Being a guitarist, producer and a singer since the age of 14, he graduated from Musicians Institute (Los Angeles) and began composing music for TV/Film and artists. Over the years, he has produced music for leading brands such as Nykaa, L’Oreal, Baskin & Robbins, Air Asia to name a few. His music stems from thumping electronic beats to melodic guitar riffs and groovy bass-lines.

He has received an award for the best background music for “Autism Across The Globe” Documentary in the international film festival in Mexico, as well as an Honourable Mention Award for the best soundtrack in the Masters of Cinema Festival in Moscow, Russia.